"Indeed I have ventured to suggest that the [British East India] company, was modeled on the Hanseatic League, as the League was no doubt modeled on the Italian Cities and they perhaps on Carthage. Thus we find the Venetian Navigation Law becomes the German Law of "Hanse goods on Hanse ships" and the law of the Merchants of England as expressed in our Navigation Acts."
— Ian Colvin in The Unseen Hand in British History.

Most conventional histories focus on political, culture and military leaders while carefully shielding readers from the "behind-the-scenes" power brokers who actually control events. Kings and nobles had landed wealth and vassals, and those were critical assets. But in all ages, gold has held a special place, and those that could purchase luxuries, cajole kings, bribe politicians, and provision armies had tremendous influence.

A good place to look for backstage operators is among those who control the gold. In other words, merchants, and money-lenders. Secret societies have exerted their influence by controlling commerce, credit, and precious metals since ancient times so histories that focus on trade and banking provide useful insights. Such histories never explicitly identify the occult nature of these operations, but they often mention secret oaths and rituals, monopolies, espionage, piracy, mercenary armies, bribery, boycotts, blackmail, racketeering, and other suspicious activities.

Since ancient times, European trade has been controlled by merchant associations patterned after their Phoenician forebearers. For centuries they have dominated commerce and horded gold using methods of deception, corruption, and coercion that are common tactics of secret societies.

The most notable commercial monopolies of the Middle Ages were the network of traders associated with Venice and Genoa in the Mediterranean, and the League of 'Hansa' cities that controlled trade in the North and Baltic Seas. Venice was an independent and prosperous trading center during Medieval times, and became enormously powerful during the Crusading era, largely at the expense of the Byzantine Empire. It's role in the Fourth Crusade, for example, was particularly reprehensible, and its leaders were notoriously scheming and treacherous.

The Hansa League of Northern Germany was no less opportunistic. They monopolized trade in the North Sea and Baltic for centuries, controlled dozens of northern cities, and were the bankers of England and the Holy Roman Empire. The league established the 'Steelyard' in England that evolved into the "City of London" trading center and dominated all commerce in Scandinavia and Russia until the 16th century. The earliest histories of both Venice and the Hansa league have been intentionally obscured, but both associations were known to engage in strange rituals and oaths, piracy, bizarre worship practices, and other disturbing behaviors. Both also appear to be related to an ancient trading nation known as "Veneti" that were likely part of the ancient Phoenician and Roman trading networks.

Genoa was one of several cities that dominated trade in the Ligurian Sea and Western Mediterranean, but the Tuscan Republics of Northern Italy, with which it was associated, were so wracked by civil War and infighting, that it never secured as powerful a monopoly as Venice. Ultimately Florence arose as the dominant city in the region, due to its financial enterprise, especially its role as banker to the Vatican. Like Venice, the Tuscan Republics were awash in treachery, poisoning, promiscuity, piracy, and civil-war, all hallmarks of Canaanite influence. 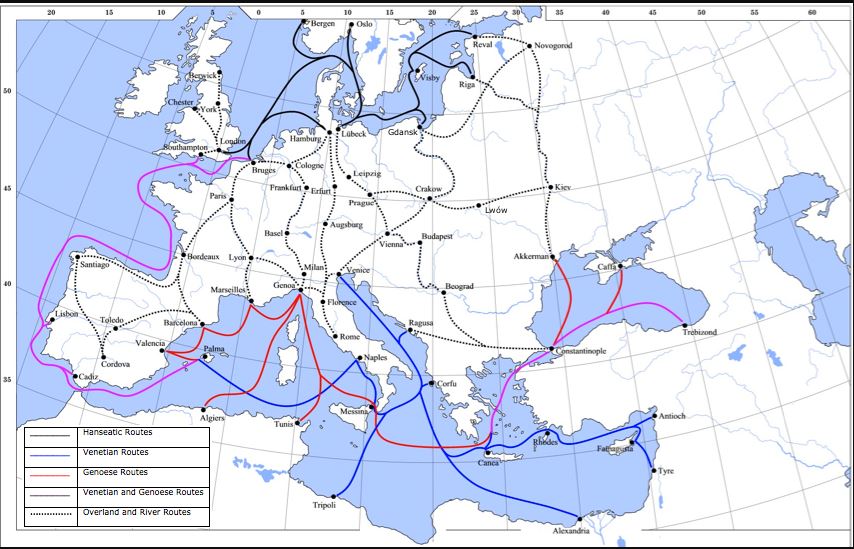 This map shows the three dominant trading monopoly networks of the Middle Ages: Hansa, Venice, and Genoa. All three were run by secretive oligarchies with strange oaths, and sinister associations.

By the 18th century, the trading and banking associations of Britain had come to dominate world commerce. The story of how this came about is complicated and shrouded in misinformation and secrecy, but the following books provide some insights into the rise of English trading companies and the 'British Empire.' All are written from "patriotic" Whiggish viewpoints, and lionize a number of rather malevolent cabal leaders. Yet for anyone who can read through a heavy doses of reality twisting and British booserism, the books contain a great many disclosures and are an excellent source of information.

This page is very incomplete. There are many other highly suspicious topics related to cabal activity in the Middle Ages. The Vehmic Courts, the Chivalric orders, the medieval guilds, "Livery companies" and "Merchant Adventurers" of London, are all deeply suspicious; in fact the entire "City of London Corporation" is of extremely dubious character and has served a the financial and commercial center of worldwide Cabal activity. And we haven't even begun to discuss the nefarious activities of the ruling parties of France, Germany, and the Netherlands. And lets not even talk about the Catholic Church. Much more work is needed to flush out the secret societies of the Middle Ages. We are aware of many sources of information, but need more time to digest and document this topic. The information listed above is just the tip of the iceburg.